Jaime Rush has taken her affinity for all things strange and unexplained and wrapped them into a series packed with action, suspense and romance.

“The Offspring series,” she says, “is everything that I loved about The X-Files, Roswell, and Highlander. Now that those shows are off the air, I can only get my fix through the DVDs. So I created my own series where I can live the adventure again. Paranormal fiction, in books and television, is huge right now, and I’ve loved and written it for many years.”

So the readers of series written by Christine Feehan, Sherrilyn Kenyon, and Kay Hooper should enjoy these books?

“Absolutely. I don’t have creatures (vampires, werewolves) in my books, though one character surprised me with shape-shifting abilities. But any reader who is willing to suspend disbelief and enter a world that’s different than his or her own will like the Offspring. What I love about my series is that it’s not all that far from reality. Some people do have psychic abilities, and we don’t know what our minds are capable of. I believe we could all be psychic if we exercised that part of our minds. Authors like Sonia Choquette give us ways to do this.”

Which then begs the question: Is Jaime psychic?

She laughs. “I’ve had definite knowings in my life, like I knew I would be published, that I’d meet a wonderful guy, and that I would win a Toyota Supra. So has my mom. The concept of psychic abilities was something I grew up with and is a natural part of my life. I’d like to get more psychic, but as with anything else, that takes time and practice.”

Jaime has also used real-life government experiments as a jumping off point for her series. She read about STARGATE, a remote viewing project that started with the CIA and was bounced between agencies before being terminated in 1995. The official results were that remote viewing wasn’t worthwhile as a military tool, but several of the participants cited specific “hits” that can’t be logically explained.

“Of course, the government wouldn’t lie to us,” Jaime says. “Right?”

Jaime goes on to say that it wasn’t only the U.S. government that was exploring using psychic abilities for their military advantage. “The Soviets were very interested, and some literature implies that they actually started the wave of experiments. The U.S. was afraid that the Soviet Union was getting ahead of us, but apparently the Soviets thought we were, too. They were even training their high-up officials to block out psychic intrusions. It’s all fascinating. And I’m having great fun with it.”

Mostly, though, she’s enjoying the group of Offspring that she’s created. “I love the group dynamics. That’s why I’ve been summing up the series as X-Files meets Lost. Throw a group of people together who have nothing in common but extraordinary psychic abilities that are often the bane of their existence and see the sparks fly! Romance, conflict, heart-pounding action while they are hunted by a faction of the government…it’s all good. The reader gets to know these people and see them grow from book to book. They’ll each get their romance and to be the star of a book.

“It’s all about the people,” she adds. “The characters are the heart of the story. Just like in real life, the people are what counts.”

Do you have to read the books in order?

“I’ve tried to make each book stand alone, even though there is an overall arc for the first three. BURNING DARKNESS jumps off that arc, answering the last questions about the mysterious project their parents were in. Subsequent books will be more stand-alone, which will make it easier for readers to jump in without having to know all the previous events. But I hope they’ll be intrigued enough to read the whole series. I think it’s always nice to read them in chronological order.

“All along the series has been evolving as I’ve been writing it, and that’s exciting. It can go anywhere and go on indefinitely. I’m looking at a whole new arc for books 7-9.”

What do you love about this book?

I love how the characters grew on me, especially Eric. Just like he did with the readers. He was a bit of a bonehead from the beginning. I really thought he’d end up incinerating himself. Then readers commented on him, fascinated about his anger and having fun with his bluntness, eager to read his story. I realized I’d better not kill him off and good thing. He became one of my favorite Offspring.

What’s the best part about this series?

I like how it’s based on things that people believe are real. Yes, even pyrokinesis (setting fires with your mind). As well as the government part. It’s not such a big stretch, and yet, it’s still fantastical in its own way. The best part is my group of Offspring. They’re all different, yet united at their core. What readers tell me they like is that it’s sexy, that the characters are fun, real, and yet, different, and the group dynamics. 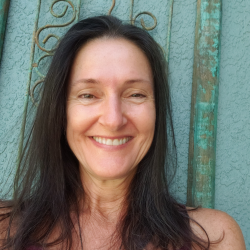 Tina Wainscott has always loved the combination of suspenseful chills and romantic thrills. Her new series is about five Navy SEALs who take the fall for a covert mission gone wrong and join The Justiss Alliance, a private agency that exacts justice outside the law. www.tinawainscott.com