Ben Coe’s powerful debut thriller, Power Down,imagines a series of tightly constructed attacks on America’s energy-producing capacity.  Under the direction of the brutal and brilliant Alexander Fortuna, terrorists manage to blow up a major hydroelectric dam.  But when they target the mammoth Capitana platform off the coast of Colombia–slaughtering most of the crew and destroying the oil field–they encounter a formidable challenge to their campaign of terror.

As crew chief of the platform, Dewey Andreas survives the attack, overcomes the terrorist team, and rescues as many of his men as possible.  Drawing upon his long-dormant training as a soldier, Andreas begins a one-man battle against terrorists and operatives as he races to stop them before they can execute the next stage of increasingly deadly assaults.

Several first-rank thriller writers have praised Coes and Power Down.  Stephen Coonts calls it “A ripping thriller from an exciting new novelist….Lots of action, a terrific hero, and a slimy villain–thrillers don’t get any better,” and Vince Flynn writes, “Power Down is terrific! With a gripping story, compelling characters, a relentless pace and nerve-wracking suspense, Power Down is one of the must-read thrillers of the year.”

Ben recently took some time to answer some questions for The Big Thrill:

You’ve had the opportunity to work at the White House under President Ronald Reagan and President George H.W. Bush as well as acting as a campaign manager for Mitt Romney during his successful gubernatorial run in Massachusetts.  In addition, you served as a speechwriter for legendary oilman T. Boone Pickens and the U.S. Secretary of Energy during the Gulf War.  In what ways did your varied background shape the direction of your thriller?

I think authenticity is very important in a thriller.  My background gave me a great platform upon which to construct the political and financial turmoil that is at the heart of Power Down.  The book concerns American energy infrastructure–a U.S. company with a major oil field off the coast of South America along with a significant hydroelectric facility in northern Canada.  Having worked in the energy industry, I was able to create a realistic and frightening premise in which this key infrastructure is targeted by our enemies.  I also know politics and have worked in finance for many years, so the way in which Power Down brings the reader into the “cockpit” is about as authentic as you can get it–whether it’s a corporate boardroom or the Oval Office–both places I’ve been.  My goal for the reader is to make him/her feel as if they are sitting there with the characters as the turmoil of the book unfolds.

Hard-hitting and no-nonsense, your protagonist is a former Delta commando and a current rigger gang chief on an offshore oil platform in the Pacific.  Was there a particular person who inspired the creation of Dewey Andreas?

Hmmm….good question.  First and foremost, Dewey is sort of an alter ego for me–a guy who I wish I was tough enough and uncompromising enough to be.  I’m also fiercely patriotic.  I wanted to write about someone who was the ultimate patriot, not a flag-waving guy necessarily but someone whose love of America causes him to take risks most people would never take.  In Dewey’s case, long before the story begins, he’s kicked out of the U.S. armed forces for a crime he didn’t commit.  Dewey has every reason to hate the U.S.  Yet, when America is at risk, Dewey comes back, risking his life in order to help the country he loves.

Power Down covers a great deal of ground, moving at a fever pitch from Colombia to Aspen to Saudi Arabia to Cuba and more.  Did you have the opportunity to travel to the places in your novel?

I traveled to some of the places in the novel, not all.  Mostly it was research.

Your thriller profiles a series of intricate and devastating attacks on America’s energy-producing capacity and Publishers’ Weekly concludes that your book is “frighteningly plausible.”  In your assessment, how probable is a terrorist sabotage of America’s energy infrastructure?  Could it be engineered on the scale suggested in Power Down?

The BP oil spill will cost anywhere from $30 billion to $40 billion.  The BP spill harmed so many things–the fishing industry in the Gulf, tourism, and other ancillary industries.  Most important, it cost eleven lives.  It was an accident but had a terrorist been behind it, you would have to conclude that it was a pretty devastating attack, right?

Energy infrastructure and, more generally, economic infrastructure, are certainly vulnerable to terrorism.  Hopefully, in addition to entertaining people, Power Down will make people think about some of these vulnerabilities and consequently move to make our infrastructure safer and more secure.

Is there a follow-up to Power Down in the works?

Yes, the second book is done and being edited.  It will be published in 2011 by St. Martin’s Press.  It features the same hero, Dewey Andreas.  The third book is almost done.

Your protagonist has a signature drink consisting of two parts coffee and one part Jack Daniel’s.  So, exactly how much research went into finding the formula for Dewey’s Cafe Noir?

What is your process when writing a novel?

I get up at 5 A.M. and write until 8 A.M.  I go to bed the night before knowing what I will write the next day.  I write five pages a day.  Sometimes it’s good, sometimes it’s not, but I think it’s important to make the process of writing regularized, a routine that you can’t procrastinate or avoid; a job.  I have four children under the age of 12.  I am typically writing with at least two of them either playing the piano, throwing a football (indoors), playing music, yelling, sitting on my lap, talking to me, crying, laughing, or asking me what I’m writing about.  Consequently, I have gotten to the point where I can’t write when I’m alone!  I’ve always been determined to try and not take too much time away from them in order to write.

What advice would you offer to aspiring writers on how to get published?

Finish your manuscript.  Then, before you try to get an agent or talk to a publisher, get advice from an editor or writer(s).  Heed that advice and re-write.  When you have something completed, go back to that person and ask if you got it right.  Take more of their advice and re-write again.  I worked with a veteran thriller freelance editor named Ed Stackler who taught me so much I can’t even begin to thank him enough.  The other way of getting great critical advice is by joining a writers group.  I have a friend whose first novel Knopf is publishing in January.  She got her critical feedback from her writers’ group.  The point is, do not put your MS into the agent/publisher universe until it’s the best it can be.  It’s like toothpaste, once it’s out there, you can’t put it back in the tube.

Next, you need an agent.  Once you have a completed MS you’re excited about, try and get a great agent.  Figure out who represents the top writers in your genre.  I approached Aaron Priest, an agent who is a legend in the publishing industry, because he represents a number of the best-selling thriller writers in the world, including David Baldacci.  He agreed to take me on after reading an early draft of Power Down. I found out while I was on a golf course in California–I felt like I was on Entourage.  Of course, I then proceeded to hit the next three balls into a lake.

Having an agent who believes in your work and who is well respected in the industry is as important as having a great publisher.  Your agent will likely have more suggested changes–they know what works, listen to them.  At some point you will have something you feel good about and they feel good about selling.  At this point, you should leave it in the hands of your agents.  If you are fortunate enough to have several publishers interested in publishing your work, don’t simply choose the one who offers the biggest advance–choose the publisher most committed to building a long-term career for you as a writer. 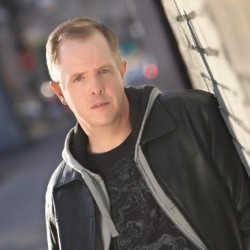 Brett King
Brett King is an award-winning professor in the Department of Psychology and Neuroscience at the University of Colorado Boulder. His debut novel, THE RADIX, was described by New York Times bestselling author Jeffery Deaver as “A topnotch thriller! Part DA VINCI CODE, part 24, THE RADIX is roller-coaster storytelling at its best.” The second book in his series, THE FALSE DOOR, will be published in December 2013 by Thomas & Mercer. King recently completed two novellas and is currently writing his third novel.

Latest posts by Brett King (see all)
0
No Comments Yet